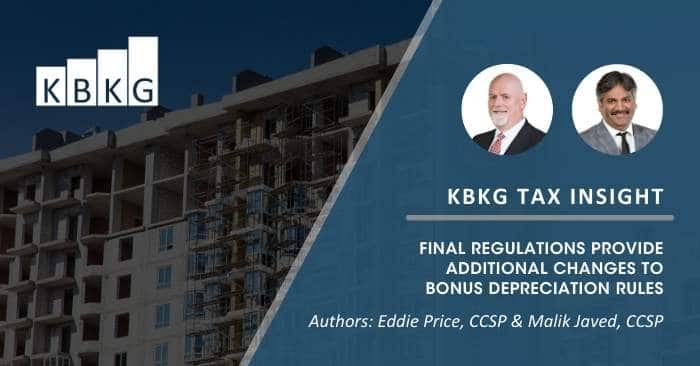 On September 21, 2020, the IRS and Treasury Department finalized the last set of final regulations related to bonus depreciation. The originally proposed versions of these regulations were issued on September 24, 2019. The changes made were primarily in response to feedback submitted by tax preparers. Following are a few highlights.

On March 27, 2020, the Coronavirus Aid, Relief, and Economic Security Act (CARES Act) amended IRC section 168(e)(3)(E) to provide that qualified improvement property (“QIP”) is classified as 15-year property, thereby making it eligible for bonus depreciation, consistent with the original intent of the Tax Cuts and Jobs Act (TCJA). The CARES Act also amended the definition of QIP by providing that the improvement must be made by the taxpayer.

The final regulations provide that a taxpayer can make a special election to claim the 100 percent bonus rate on certain components acquired or self-constructed after September 27, 2017 that are part of larger self-constructed property where construction began before September 28, 2017. There is no longer a placed-in-service requirement for using the component election. The final regs also expanded the eligibility for larger self-constructed property to include property that is manufactured, constructed, or produced under a written contract that does not meet the definition of a “binding contract.”

The final regulations provide that the larger self-constructed property must be:

(i) MACRS property with a recovery period of 20 years or less, computer software, water utility property, or qualified improvement property, and
(ii) qualified property eligible for bonus under the 2019 final regs without regard to the acquisition date requirement.

KBKG Insight:
Non-residential real and residential rental property are not included in the larger self-constructed property when calculating the percent of costs incurred prior to September 28, 2017. In many cases, this may help the taxpayer satisfy the 10 percent safe harbor since the construction of QIP and section 1245 property tends to occur later in the construction process.

KBKG Insight:
The five-year lookback period expands the ability of taxpayers to treat used property as eligible for bonus depreciation. Additionally, it reduces a significant administrative burden that would have been required under the 2018 proposed regulations.

The IRS plans to issue procedural guidance for taxpayers to choose to apply the final regulations in prior tax years or to rely on the proposed regulations issued in September 2019.

Do you need help identifying qualified improvement property or taking full advantage of the component election? Contact a depreciation specialist to discuss options on how to maximize depreciation during this time of uncertainty.

Eddie Price, CCSP – Director
Texas
Eddie is a Director with KBKG and oversees the Southern region and its Texas-based operations. He is a Certified Cost Segregation Professional (CCSP) with the American Society of Cost Segregation Professionals. With over 35 years of cost segregation experience dating back to the Investment Tax Credit period, Eddie is one of the most experienced experts in the industry. » Full Bio

Malik Javed, CCSP – Principal
New York
Malik Javed is a Principal and oversees engineering operations for Cost Segregation projects from KBKG’s New York practice. He is a Certified member of the American Society of Cost Segregation Professionals (ASCSP) and is currently a member of the ASCSP Technical Standards Committee. Since joining KBKG in 2004, Malik has performed thousands of Cost Segregation studies for clients in various industries and regularly reviewed architectural and engineering drawings and construction cost budgets. » Full Bio