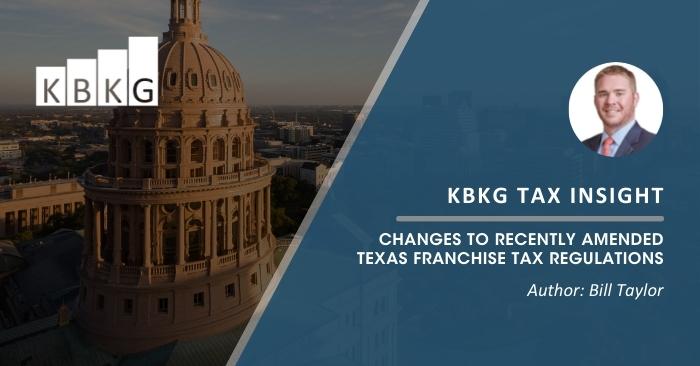 Published on June 10, 2022, Texas Register, the Texas Comptroller proposed revisions to the recently amended Texas franchise tax regulations surrounding the Texas sales and use tax exemption and the Texas franchise R&D tax credit. These revisions soften the Internal Use Software (IUS) and Combined Group definitions after receiving overwhelming feedback surrounding the Texas franchise tax amendments to the regulations from October 2021. The October 2021 amendments created a complete disallowance of R&D expenditures associated with IUS. They restricted a combined group’s ability to use the R&D credit carryforward if there was a membership change within the controlled group.

On June 10, 2022, with revisions to the previously amended regulations, the Comptroller removed the “restrictive” language surrounding the disqualification of development expenses associated with IUS in Texas and narrowed the definition of what is considered IUS. The IUS exclusion in Texas does not apply to software used in an activity that constitutes qualified research or in a production process that meets the requirements of the 4-Part Test. Texas now defines IUS as it was defined Federally before final internal use software regulations were released in November 2016. Specifically, §1.41-4(c)(6) defines IUS, and taxable entities may now elect to file either of the following versions of paragraph (c)(6):

These proposed rules were fast-tracked and appeared in the June 10, 2022, issue of the Texas Register. It is anticipated that the Comptroller’s office will adopt the amendments on July 10, 2022.

Questions about Texas franchise tax regulations and how this news applies to your business? We can help. Contact us today.

Bill Taylor – Director
Texas
Bill Taylor is a Director for KBKG’s Research & Tax Credit Consulting practice. Based in Dallas, TX, Bill has over 10 years of experience providing federal tax consulting services to companies of all sizes within various industries, including technology, aerospace and defense, manufacturing, oil and gas, gaming, banking, and other professional services. » Full Bio