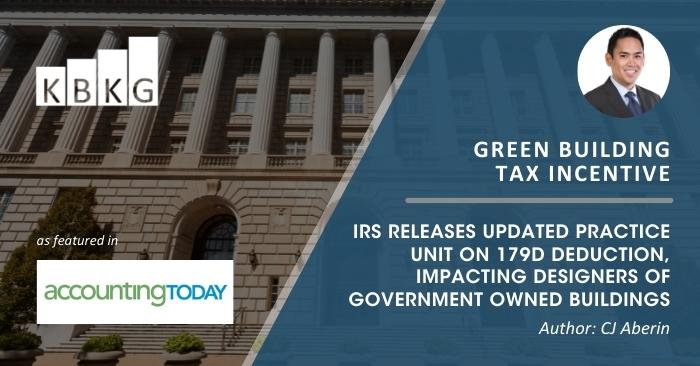 As featured in Accounting Today

On Friday, June 24, 2022, the IRS Large Business and International (LB&I) Division released an updated 53-page Practice Unit on the Section 179D Energy Efficient Commercial Building Deduction. The purpose of this Practice Unit is to serve as a job aid and as a training manual on 179D tax deductions for IRS staff and is meant to provide guidelines for how to conduct an examination.

Who is the Designer?

Government building owners have to ability to allocate 179D tax deductions to the designers of the building. Existing guidance from Notice 2008-40 has always defined an eligible designer as “a person that creates the technical specifications” for the energy efficient property eligible for 179D tax deductions. Examples of a designer may include “an architect, engineer, contractor, environmental consultant or energy services provider who creates the technical specifications for a new building or an addition to an existing building that incorporates energy efficient commercial building property.” Additionally, “a person that merely installs, repairs, or maintains the property is not a designer.”

The IRS Practice Unit emphasizes that examiners determine eligibility for allocation of a 179D deductions by obtaining and reviewing contracts to review the taxpayer’s responsibilities in the design of energy efficient government building property. Design responsibilities for a building are designated by contract and eligible designers should be able to present a design contract, the technical specifications, stamped or sealed drawings, and additional documentation establishing designer status.

The Practice Unit encourages examiners to look at stamped or sealed drawings to determine a Designer of Record, which is useful in determining if a taxpayer is an eligible designer. It also specifically cautions that “many trade sub-contractors produce what is referred to as Shop Drawings to make sure any material item installed in the building conforms to the design requirements of architects and engineers. These Shop Drawings are not the Technical Specifications required of Designers to qualify for the IRC 179D deduction. Shop Drawings are subordinate to the Technical Specifications produced by the architects and engineers who are the Designers of the project.”

By creating a clear delineation between “Sealed Drawings” and “Shop Drawings,” the IRS appears to emphasize that architects and engineers are more likely to qualify as eligible designers than a contractor whose role in the design may have been more limited. Although the Practice Unit doesn’t make any mention of design-build contractors, it’s important to note that they are often contracted for both design services and construction and can often make the case that they are eligible designers for 179D tax deductions.

Although a government entity generally has the ability to determine which designer(s) to allocate 179D tax deductions to, the Practice Unit stresses that a government building owner doesn’t have the authority to determine whether a designer meets the requirements of a “Designer” as defined in Notice 2008-40. Obtaining a signed allocation letter from a government building owner doesn’t entitle a taxpayer to a 179D deduction if they don’t first meet the definition of a “Designer.”

In addition to providing more clarity on identifying eligible designers, the IRS stresses that tax-exempt entities and non-profit organizations are not eligible to allocate 179D deductions to their designers and provides an example where some state universities place buildings in private foundations that wouldn’t be eligible for allocating 179D deductions.

How the deduction gets allocated and certified is important as well. Agents are advised to interview those who sign allocation letters on behalf of the government entity to ensure that they actually have the authority to allocate the 179D deduction. Certification by properly licensed individuals is also required to claim the deduction.

The final step for examination is to consider penalties for taxpayers if adjustments warrant them. In the event that a 179D deduction adjustment results in underpayment or an excessive refund or credit, IRS agents are asked to consider accuracy-related penalties such as those for negligence or substantial underpayment along with penalties for an erroneous claim for refund.

While this Practice Unit is meant to educate and train IRS staff, it also provides tax professionals and taxpayers more visibility into how the IRS would view 179D deductions under examination. With the construction of government buildings involving various designers, contractors, and vendors, it does appear that traditional designers such as architects and engineers have significantly less audit exposure from taking 179D tax deductions than other contractors or vendors involved in the building’s construction, assuming a 179D analysis is conducted properly. With the IRS focusing on and refining how they conduct their examinations of 179D deductions, choosing the right 179D tax consulting firm to properly secure and certify these deductions can make all the difference for affected taxpayers.

Questions about the updated practice unit on 179d deductions and how this news applies to your business? We can help. Contact us today. 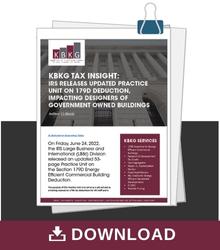 Would you like to speak with one of our 179D experts? Schedule a call.