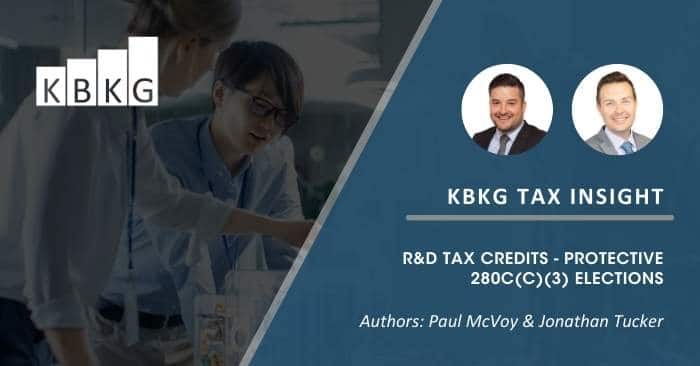 KBKG Insight:
Tax Cuts and Jobs Act (“TCJA”), signed on December 22, 2017 by President Trump, reduced the maximum corporate tax rate to 21% from 35%. As a result, the “net” R&D credit benefit available to taxpayers will increase.

A valid section 280C(c)(3) election can only be made by actually computing and claiming the reduced 13%, in the case of the regular credit method, credit on taxpayer’s original, timely filed tax return. Taxpayer cannot make a valid election without claiming the credit, by merely writing the words “280C”, or by making a statement on the original tax return that taxpayer elects section 280C in the event that they later determine that they have research credit. If the taxpayer files an amended return claiming the reduced credit under section 280C(c)(3), when they did not claim credit at the reduced rate on the original timely filed return, the election is invalid and the claim should be returned to taxpayer to correct.

The requirement to claim a credit in order to make a valid election was deemed incorrect within: AM2008-002, which stated:

A taxpayer that clearly indicates its intent to claim the reduced credit by noting on the Form 6765 attached to its timely filed an original return for the taxable year “section 280C” next to the line on which the current year reduced credit could be claimed or by claiming a nominal credit amount along with the “section 280C” notation has satisfied the requirements under §§ 280C(c)(3) and 1.280C-4(a). Such notations clearly signify that the taxpayer has made an affirmative election to claim the reduced credit.

Furthermore, AM2008-002 addressed the availability of a “Protective” 280C(c)(3) election. More specifically, the guidance read:

Once made, the election is irrevocable and, thus, a taxpayer may not subsequently take an inconsistent position on a later filed return. In the situation where no credit amount or a nominal credit amount is claimed, the taxpayer must calculate the reduced credit amount under ’41(a) or 41(c)(4) determined by the method provided in § 280C(c)(3)(B) on its timely filed amended tax return or other claim for refund.

An election under section 280C(c)(3) to have the provisions of section 280C(c)(1) and (c)(2) not apply and elect the reduced research credit under section 280C(c)(3)(B) shall be made on Form 6765, “Credit for Increasing Research Activities” (or any successor form). In order for the election to be effective, the Form 6765 must clearly indicate the taxpayer’s intent to make the section 280C(c)(3) election, and must be filed with an original return for the taxable year filed on or before the due date (including extensions) for filing the income tax return for such year, regardless of whether any research credits are claimed on the original return. An election, once made for any taxable year, is irrevocable for that taxable year.

The final 280C(c)(3) regulations specifically contemplate the “Protective” 280C election regardless of whether any research credits were claimed. Provided the taxpayer clearly indicates intent to make the Section 280C(c)(3) of the Form 6765 on the original timely filed return (including extensions), the taxpayer may claim reduced credit in the future.

Per Internal Revenue Bulletin 2015-11, if a taxpayer is undecided whether to claim the regular or alternative simplified credit for the taxable year but wants to preserve the operative effect of the section 280(c)(3) election for the taxable year, merely checking the 280C “Yes” box on the from 6765 under the regular credit method section, in and of itself, does not preclude a taxpayer from making the alternative simplified credit election on an amended return. The 280C election does not bind a taxpayer to a credit method.

As claiming and substantiating the research credit can be a complex and laborious process, the Protective election may be an invaluable solution. There are multiple areas to consider during the annual tax planning process to consider in deciding whether to make a Protective 280C election.

Due to Section 38 rules on the credit utilization, taxpayers were generally unable to reduce their tax liability below the Alternative Minimum Tax (“AMT”). Many conduit entities with partners or shareholders in AMT would not benefit from the R&D credit. Furthermore, taxpayers in an AMT position who did not file the R&D credit on a timely filed return (including extensions) were required to amend historical tax returns to take advantage of the benefit. Unfortunately, the amendment of tax returns, for taxpayers in AMT, for the research credit often increased tax liability due to the Section 280C(c)(1) add back of Section 174 expense in the amount of credits claimed. A “Protective” 280C(c)(3) election allows taxpayers in this position to avoid the Section 174 expense add back and claim the R&D credit without incurring additional tax liability.

KBKG Insight:
It is important to note, for tax years beginning after December 31, 2015, The PATH Act allows for Eligible Small Businesses (i.e., $50 million or less in gross receipts for the prior three tax years) to claim the R&D credit against alternative minimum tax. Furthermore, the TCJA increased AMT exemptions for individual taxpayers which may potentially increase the R&D credit benefit.

The 280C(c)(3) election also has state tax compliance implications. Many state jurisdictions begin with federal taxable income before adjusting for state-specific modifications. As the amount of R&D credit impacts the add back for Section 174 expenses, a taxpayer not making a 280C(c)(3) election would need to revise the starting point for all state tax returns which begin with federal taxable income.

Effective for tax years beginning after December 31, 2015, Qualified Small Businesses (“QSB”) may qualify to use R&D credits to offset up to $250,000 of payroll tax liability. A QSB is a corporation, partnership, or individual with less than $5 million of gross receipts during the taxable year AND the taxpayer did not have gross receipts for any tax year before the fifth tax year ending with the year of the claim. The payroll benefit can be claimed for five consecutive years. Generally, a 280C(c)(3) election would decrease the total potential benefit available to offset future payroll tax liabilities.

With an unrelenting busy season in addition to the intricacies associated with the calculation and substantiation of the R&D credit, taxpayers should discuss with their tax advisors the potential for making a Protective 280C(c)(3) election.

Reassess and find out if the new R&D Tax Credit regulations will benefit you. Contact a KBKG R&D specialist today.

Paul McVoy – Principal
New York
Paul McVoy is a Principal for KBKG’s R&D Tax Credit Consulting practice, overseeing the practice form our New York office. In this role, Paul devotes his time to consulting companies in maximizing their R&D tax credit claims. Prior to joining KBKG, Paul was a manager at a Big Four accounting firm out of the Philadelphia, San Diego, and Los Angeles offices. » Full Bio