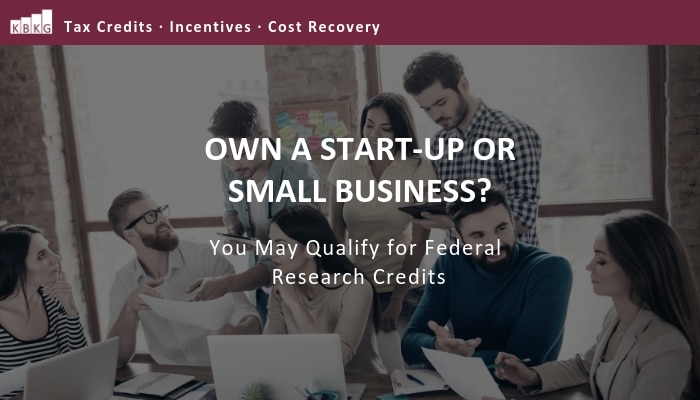 Billions of dollars worth of research credits go unclaimed every year in the United States. This is primarily due to many taxpayers not being aware of the credit or not quite understanding it. In addition, when a reference is made to research and development (“R&D”), taxpayers often think about lab coats and test tubes. In reality, the R&D tax credit can apply across a variety of industries.

The provisions within the PATH Act provided substantial benefits to qualifying small and mid-sized businesses. Historically, taxpayers that did not generate an income tax liability or were in an Alternative Minimum Tax (“AMT”) position were unable to utilize the research credit. The new provisions significantly increased the number of taxpayers that can benefit from the credit.

For example, start-up companies, across all industries, are now great candidates for the payroll tax offset. Generally, these start-up companies are in a taxable loss position and are not generating an income tax liability. Now, due to the changes in legislation allowing a Qualified Small Business (“QSB”) to offset a portion of payroll tax expense, the R&D credit generates a large cash benefit annually (up to $250,000).

A QSB is a corporation, partnership, or individual with less than $5 million of gross receipts during the tax year, and the taxpayer did not have gross receipts for any tax year prior to the fifth tax year ending with the year of the claim.

A software developer began operations in 2016. The Company is comprised of 15 individuals and is not expecting any gross receipts until 2019. In 2018, the company had zero gross receipts and a payroll tax liability of $125,000. The Company generated qualified wages of $2 million dollars which generated a federal R&D credit of $200,000.

This Company will file their 2018 tax return in March of 2019. Prior to the PATH Act, this taxpayer could have claimed the research credit, but would not have utilized any of the credits until they generated an income tax liability. Due to the PATH Act, they will now be able to offset the qualified portion of their payroll taxes in the second quarter. Any unused credits will be carried forward to subsequent quarters.

Start-ups and small businesses can try out KBKG’s Research and Development Payroll Tax Credit Tool by entering in a few details, such as the total number of employees engaged in R&D and a number of supplies used in R&D, to instantly calculate estimated payroll tax offset. The calculator is available at KBKG.com/research-tax-credits/research-and-development-payroll-tax-credit-calculator.

Download Article: Own a Start-up or Small Business? You May Qualify for Federal Research Credits.