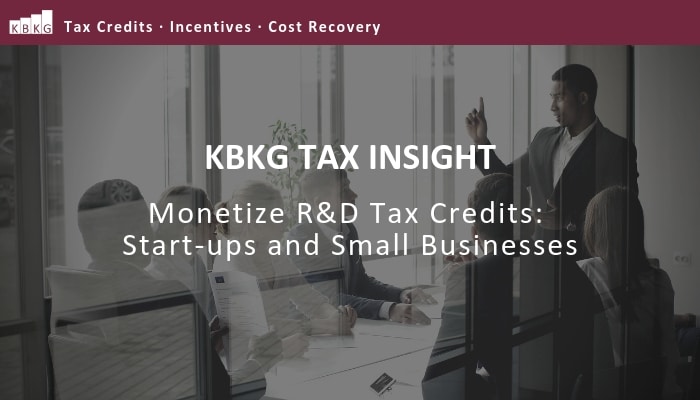 What start-up or small business wouldn’t want an extra $250,000? Thanks to The Protecting Americans from Tax Hikes (“PATH”) Act of 2015, there is a new opportunity to monetize research and development (“R&D”) tax credits. Start-ups and small businesses who were previously unable to realize a benefit from this lucrative incentive should reassess R&D tax credit eligibility to take advantage of the new payroll tax liability offset.

Effective for tax years beginning after December 31, 2015, Qualified Small Businesses (“QSB”) may qualify to use R&D credits to offset up to $250,000 of payroll tax liability. A QSB is a corporation, partnership, or individual with less than $5 million of gross receipts during the taxable year AND the taxpayer did not have gross receipts for any tax year before the fifth tax year ending with the year of the claim. The payroll benefit can be claimed in the first quarter subsequent to filing the prior year income tax return. For example, the earliest an eligible taxpayer filing March 15, 2017 could realize the payroll tax benefit would be with the second quarter Form 941 filed in July.

The IRS previously released a draft Form 8974, “Qualified Small Business Payroll Tax Credit for Increasing Research Activities” which is used to claim the payroll tax liability offset. The Form 8974 will also act as an intermediary between the revised quarterly employment tax Form 941 and the annual “Credit for Increasing Research Activities” Form 6765. It is important to note the Form 8974 will need to be attached to the employment tax Form 941 for each quarter the R&D credit is applied against the taxpayer’s payroll liability.

Case Study: Qualified Small Business
Founded in 2014, a Company performing R&D activities has been in losses since inception. The Company does not generate an annual income tax liability due to the losses incurred. As such, the Company has not claimed the research credit. In 2016, the Company estimates gross receipts of $2 million with an estimated payroll tax liability of $100,000 in 2017. KBKG’s R&D Tax Credit experts calculated $220,000 of federal research credit. The Company may elect to offset $100,000 of 2017 payroll tax liabilities and carryforward $120,000 of unused R&D credits to offset future payroll tax obligations.