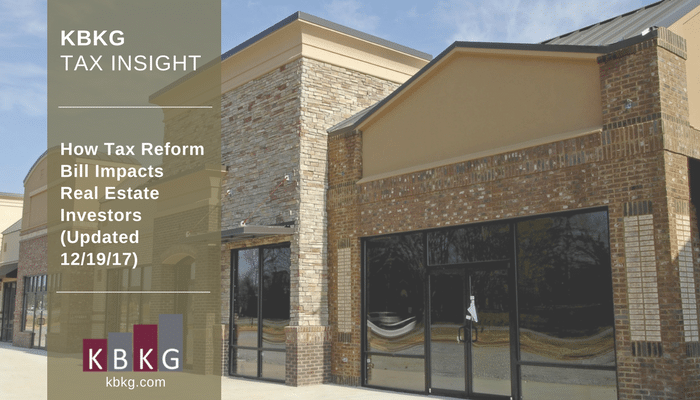 For the most up-to-date information on Qualified Improvement Property, see our latest post.

On December 15, the conference report for the Tax Cuts and Jobs Act was released and reconciles several key differences for real estate owners between the proposed House and Senate bills (discussed in KBKG’s previous Tax Insight dated November 10, 2017). The agreement to these issues are as follows:

Beginning in 2018, there will be no separate definitions of qualified leasehold improvements, qualified retail improvements, and qualified restaurant property. This is all replaced with a general 15-year recovery period for Qualified Improvement Property (QIP).

Note: Long Production Period Property would get an additional year to be placed in service at each rate.

Qualifying property eligible for 179 expensing will include roofs, HVAC, fire protection & alarm systems, and security systems, as long as these improvements are made to non-residential real property and placed in service after the building was first placed in service.

Section 179 expensing is also expanded to include tangible personal property used in connection with furnishing lodging, such as furniture and appliances in hotels, apartment buildings, and student housing.

The conference agreement provides a reduction of the corporate tax rate to 21% for the tax years beginning on or after December 31, 2017.

There are slightly modified tax rates for individuals with the top bracket reducing from 39.6% to 37.0%. The conference agreement further adopts a 20% deduction for pass-through income of real estate investors, along with certain other businesses, limited to the greater of

a) 50% of wage income or
b) 25% of wage income plus 2.5% of the cost of tangible depreciable property for qualifying businesses, including publicly traded partnerships but not including certain service providers.

KBKG Insight: 2017 is a critical tax year for both corporate and pass-through businesses to accelerate tax deductions on real estate holdings as it can lead to permanent tax savings via the tax rate arbitrage. Consider scrubbing fixed asset schedules to identify missed repair deductions, missed retirement loss deductions, and cost segregation opportunities. Tax professionals should notify clients that extending 2017 tax returns may be necessary to ensure enough time to deploy this time-sensitive strategy.

For most businesses, there will be limits to interest deductions except for businesses with average annual gross receipts of less than $25 million over past three years.

For real property trades or businesses, however, taxpayers have the option to elect out of the limitation on interest deductions.

KBKG Insight: Taxpayers must evaluate the benefit of full interest deductibility verses the use of ADS depreciation recovery periods they are required to use if that election is made.

The corporate alternative minimum tax (AMT) is being fully repealed while the individual AMT is still applicable, albeit with higher exemption amounts and significantly higher phaseout thresholds through 2025. As a result, less individual taxpayers are expected to be subject to AMT.

KBKG Insight: Taxpayers who previously passed on claiming any general business tax credits because they were limited by AMT should reassess their situation. For instance, multifamily investors that were in AMT in 2017 may find themselves no longer paying AMT in 2018, allowing them to make full use of tax saving strategies like securing the Residential 45L Tax Credits on prior projects.