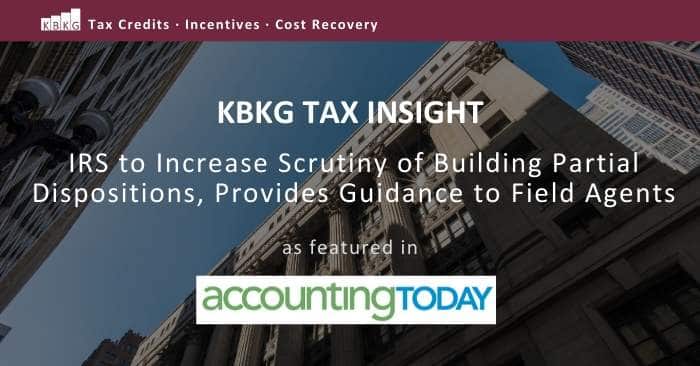 As featured in Accounting Today

KBKG Insight: The IRS is concerned that taxpayers are not properly recognizing the gain or loss on partial dispositions of building components. A newly created IRS Process Unit to assist agents on how to examine a partial disposition of a building spotlights the need for taxpayers to make sure they are doing it right!

According to the Process Unit, once an examiner has determined there is a risk that the taxpayer didn’t comply with the rule for reporting a partial disposition of a building (or its structural components), the agent should follow the following five examination steps:

Step 2 – Identify the Disposed Portion of the Building:
A taxpayer’s books and records must be used to substantiate the identity of the portion of the building or the structural component disposed. The examiner should review the taxpayer’s books and records to determine whether they provide enough information to identify the portion of the building or its structural components disposed. The examiner should also verify that the taxpayer has a depreciable interest in the property. If the disposed portion cannot be identified from the taxpayer’s books and records, then the taxpayer cannot recognize the partial disposition. The examiner should disallow the partial disposition, adjust for the gain or loss recognized, and adjust the basis of the respective asset(s).

Step 3 – Identify Partially Disposed Asset and PIS Date:
Identifying which asset is partially disposed of and its PIS date begins with the taxpayer’s books and records. The disposition regulations provide that, generally, the specific identification method of accounting must be used by a taxpayer to identify the asset in the case of the disposition of an entire asset or a portion of an asset. Under the specific identification method, the taxpayer can determine the particular taxable year the disposed asset (or partially-disposed asset) was PIS. However, it may be impracticable from the taxpayer’s records to specifically determine the PIS date of an asset when there is a disposition of a portion of the asset that has been replaced multiple times over the years. When it is impracticable to specifically identify the partially-disposed asset in the taxpayer’s books and records, the disposition regulations provide for simplified methods to be used to identify the partially-disposed asset: First-In-First-Out (FIFO); Modified FIFO; or a mortality dispersion table, if the asset is a mass asset; or any other method the Secretary may designate by publication. The taxpayer cannot recognize the partial disposition if:

Substantiating Partial Dispositions:
Taxpayers may know they have a partial disposition and yet struggle with the calculations supporting steps 3 through 5 from the Process Unit above. However, there are two tools that may prove helpful in these situations. First, a proper cost segregation study will identify the various MACRS recovery periods found in a building, the eight specific building systems prescribed by the Tangible Property Regulations, and other primary components that may be disposed and replaced in future years. Therefore, cost segregation studies can provide essential data needed to perform a partial disposition calculation and may be very useful for years to come as improvements continue to be made to the building.

Second, in those situations where no cost segregation study is available, there is a practical way to estimate the unadjusted depreciable basis of a building component that has been disposed from the cost of the replacement asset as long as the replacement is considered to be a restoration. It involves using an IRS recommended discounting methodology based on the Producer Price Index (PPI), as per T.D. 9689 (Guidance Regarding Dispositions of Tangible Depreciable Property).

KBKG’s Online Partial Disposition Calculator:
KBKG has developed an online partial disposition calculator using this PPI discounting methodology because of the difficulty in determining the tax basis of each component when a cost segregation study is not available. It’s designed to be a turnkey solution allowing tax preparers to estimate the unadjusted depreciable basis of a building component that has been disposed in order to claim a partial disposition deduction.

KBKG’s calculator takes the “replacement cost” of the new component and discounts it back to the place-in service date of the original disposed component. The calculator accounts for the condition of the asset (at the time it was acquired), which is based on effective age and normal life. Remember, the PPI approach is only applicable for improvements deemed as “restorations”. If the improvement is a “betterment” or an “adaptation”, please contact KBKG to assist with determining the partial disposition basis using engineering and estimation principles.

Partial dispositions are generally beneficial to taxpayers and in some cases are required. It’s important that taxpayers properly calculate and substantiate these dispositions that must be recognized on a timely filed tax return.