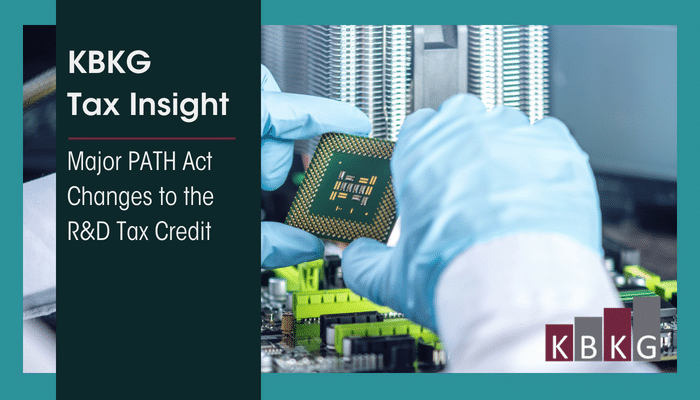 Major PATH Act2 changes to the R&D Tax Credit for the years beginning after December 31, 2015:

The federal R&D Tax Credit has provided taxpayers conducting qualified research a significant tax benefit since it was first signed into law by President Reagan in 1981. Although billions of dollars worth of R&D credits were claimed each year, there were still a few hurdles many taxpayers faced influencing their decision to claim the credit. The major obstacles were:

1. The temporary nature of the credit;
2. companies that were in a loss position could not monetize the credit; and
3. the credit could only offset regular tax liability

Due to its temporary nature, taxpayers had to sweat it out each year or two to see whether Congress was going to renew the R&D Tax Credit. Since its inception, it has expired 16 times with one period where the credit did not exist. This made it difficult for companies to conduct proper tax planning, budget for resources, make financial and hiring decisions, raise proper capital, or secure debt financing. The uncertainty surrounding their taxable position made running their businesses challenging.

Then came the Protecting Americans from Tax Hikes Act. The act, passed by Congress and signed by President Barack Obama in December 2015, attempted to remove some of these barriers to claiming the R&D credit. One of the more important achievements of the PATH act was the permanent extension of the research credit allowing taxpayers to plan and budget for its existence.

The PATH Act also created notable change for qualified start-up companies. Traditionally, start-up companies remained in losses during the early years when working on their new products or software. While these companies performed a substantial amount of qualified research, the fact that they were in a taxable loss position prevented them from pursuing the R&D credit. The PATH act changes now allow eligible small businesses to use up to $250,000 of research credits annually against their payroll tax liability. A qualified startup is defined as a company with less than $5 million in gross receipts (for the current tax year) and no gross receipts for any tax year preceding the five-tax-year period ending with the tax year. For example, if a company’s first year of election is 2017, the company must not have had gross receipts in tax years preceding 2013. The election cannot be made for more than 5 years.

KBKG Insight: The payroll tax offset offers a significant opportunity to taxpayers engaged in software development. Industries with long lead times to market that employ highly-compensated employees tend to operate at a loss, at least in the first few years. The payroll tax offset offers these taxpayers another avenue for the monetization of the credit.

KBKG Insight: This is particularly useful for pass-through entities. Although the R&D credit is claimed at the entity level, credits flow through to the individual shareholders or partners in pass-through entities on the Schedule K-1. Prior to the PATH act, individual partners or shareholders of companies could not use the credit if they were in AMT. After the PATH act, these same taxpayers can now use the R&D credit to drop their tax liabilities below AMT levels.

Interested in learning more? Our technical experts cover this information and more during our R&D Tax Credits for the Software Development Industry webinar. View our course calendar and register for free »