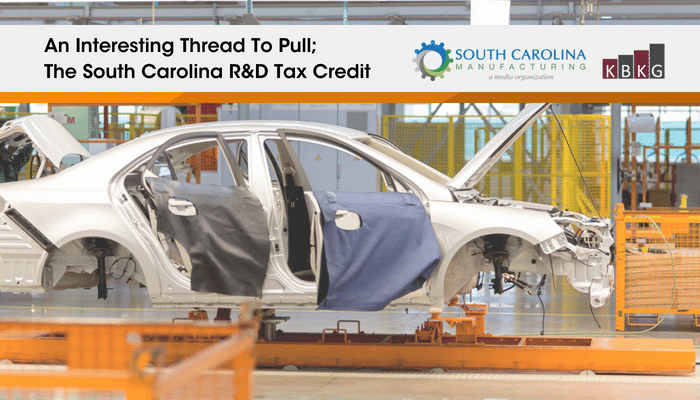 Stop me if you’ve heard this one before, “South Carolina is a branch manufacturing state.” They tell us there’s not enough headquartering here, not enough research and development, but what if I told you the Palmetto State has a solution, in theory.

South Carolina’s Research and Development Tax Credit was outfitted for the needs of manufacturers. Essentially, we know where our bread is buttered here. We build things in South Carolina and there is a growing pool of potential first tier suppliers and innovators of new technology primed for business.

Enough to remove the stigma of “branch manufacturing state”? Perhaps? But it looks more and more that we are going to have to do it all ourselves.

Clemson Economist, Bruce Yandle, said an economy dominated by branch manufacturing facilities like Volvo, Mercedes, BMW, ZF, and their related suppliers will not entice home-based research scientists and their labs to transfer locations with incentives.

However, in-state firms that are young and struggling can take advantage of the R&D Tax Credit, he said. Although it may be impossible to quantify the results, effective use of the credit could grow the sector in South Carolina and remove the title of “branch manufacturing state” from within.

So how do we do this?

Brian Kuney, a regional VP at the South Carolina Manufacturing Extension Partnership, said most in-state firms don’t understand the R&D credit, but it is an advantage and should be utilized, “alongside a tax expert.”

And there’s no shame in this. Manufacturers are busy building things, monitoring production schedules, managing large staffs and sweating the bottom line. Hard to imagine any of them fitting in the time to become formidable CPA’s. But should the credit increase its awareness in the marketplace, it will become a more interesting thread to pull for everyone.

David Jones, a CPA and Partner at GreerWalker, said manufacturers can struggle to identify which wages, supplies, independent contractor costs and other expenses qualify for the R&D credit.

“We want to understand their operations to better identify costs associated with new products and services,” he said. “In addition, we can help them identify wages for individuals who directly support or supervise R&D efforts since those costs qualify as well.”

And the credit is not just for those getting started, or those hoping to turn their garage innovation into a supplier’s facility along the interstate. Established firms can use the credit when their clients request complex modifications to an existing supply of parts.

Although the credit is also given at the federal level, not every state offers the tax incentive. The South Carolina R&D Tax Credit was designed to reward companies for their research and development activities over a taxable year and is equal to 5 percent of the taxpayer’s qualified research expenses. However, it cannot exceed 50 percent of the company’s remaining tax liability after all other credits have been applied. But, any unused portion of the credit can be carried forward 10 years from the date of the qualified expenditure.

Unfortunately, South Carolina is littered with tales from companies who missed out on the opportunity.

Harv Rettberg, a founder and former chief sales officer of TForm, a South Carolina manufacturer of thermoformed packaging, said the company did not utilize an R&D tax credit, or any credits, getting started.

“It would have been nice to have mentorship on such things, we missed this one,” he said. “We needed tangible real-world guidance to connect us through sensible in-state incentives and true business strategies rather than ‘pie in the sky’ solutions promising riches.”

And there is another side to this coin.

“During my initial venture, an aerospace company founded in 2007 and sold in 2014, we utilized the R&D credit multiple times while investing in efforts to develop specialized prototype components and also new processing capabilities,” he said. “We qualified for federal R&D tax credits worth six figures over two years and an additional five figures in South Carolina state tax credits, both offset federal and state income taxes.

Without leveraging the credits through professional tax advice, Premo said the company would not have enjoyed the additional resources to create more jobs, expand markets and further grow the company.

Chad Niehaus, a regional director at KBKG, works closely with manufacturers on relative tax services and fervently agrees with Premo, calling the calculation and substantiation of the R&D tax credit a “large undertaking”.

“Most manufacturers decide to utilize outside providers to prepare the necessary, complex calculations and documentation,” he said.

Should awareness of the credit and the use of appropriate tax professionals become more available to the state’s manufacturing network, we will see the theory tested. We will have quantifiable data linking the use of R&D tax credits to South Carolina’s push to the forefront of research and a foundation of headquartered, global brands.