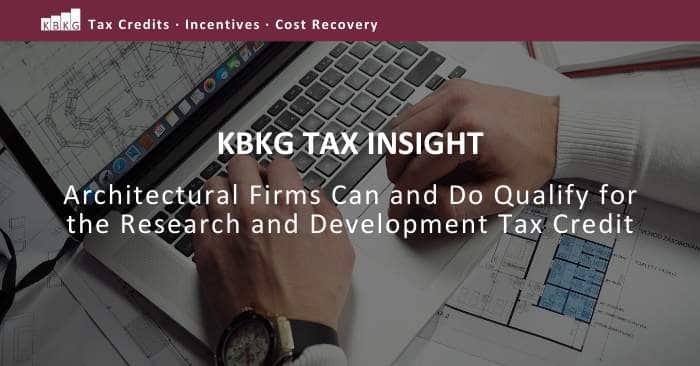 Who says architectural firms can’t qualify for the research and development (R&D) tax credit? Not the United States Tax Court (USTC). The USTC recently granted summary judgment in favor of an architectural firm that claimed the R&D tax credit. At the heart of this judgment was whether Populous Holdings, Inc. (Populous) incurred contract research expenditures that were specifically excluded under the Internal Revenue Code (IRC) §41(d)(4)(H) as funded research. On December 6, 2019, Judge Joseph Robert Goeke of the USTC granted a summary judgment that Populous did incur research expenditures that should not be disallowed as funded research. The summary judgment outlines how taxpayers can evaluate their contracts to determine whether research activities are funded or not. R&D is considered funded unless two requirements are met: (1) payment is contingent on the success of the R&D, and (2) substantial rights to the R&D are retained.

From 2010 to 2011, Populous provided architectural design services and claimed R&D tax credits for over 100 contracts and subcontracts. The Internal Revenue Service (IRS) claimed Populous was not entitled to these credits due to the R&D being funded, and therefore, denied Populous the R&D tax credits claimed. Under IRC §41(d)(4)(H), funded research is any research funded by any grant, contract, or otherwise by another person (or governmental entity) and is excluded from being claimed for the R&D tax credit. To resolve the issue, Populous and the IRS agreed to have the USTC review five representative contracts to determine if the contracts were funded.

In Judge Goeke’s decision, he determined all five contracts reviewed were fixed-priced contracts, and in general, “Fixed-priced contracts are inherently risky for the contractor if the research is unsuccessful.” He further stated, “Fixed-price contracts generally place maximum economic risk on contractors who ultimately bear responsibility for all costs and resulting profit or loss.” In addition to payment consideration, Judge Goeke noted, “All five contracts granted the clients the right to review and approve design documents and dispute invoices,” which confirms payment was for the success of the research (i.e., a product or result of the research).

The IRS contended that Populous did not retain substantial rights to the R&D in at least three of the five contracts. The IRS focused on who “owned” the documents produced by Populous because the contracts stated that documents were owned by the client, including all design documents, construction documents, and other documents prepared by Populous. Furthermore, the IRS argued that the contracts’ stated clients had sole rights to the architectural copyrights. However, ownership of the documents does not dictate the right to use the R&D. Regulation §1.41-2(e)(3) states that the right to use research does not have to be exclusive to retain substantial rights. Just like in determining if payment was contingent upon the success of the research, the USTC considered various case precedents in determining if substantial rights were retained, such as if Populous had the right to use the research without paying.

Judge Goeke noted, “There is no provision in the contracts that prohibits petitioner [Populous] from using the research it performed or that it required it to pay the client for use of the research.” As such, Populous did retain substantial rights to the R&D.

KBKG Insight: This summary judgment has significant implications, as it could allow many taxpayers that may be performing contract research under fixed priced contracts to qualify for the R&D tax credit. It further affirms existing precedent on what is considered funded research, differentiating that from payments contingent on the success of R&D and retention of substantial rights to R&D. It all comes down to the terms of the contract, regardless of your associated industry.

Download article: Architectural Firms Can and Do Qualify for the Research and Development Tax Credit