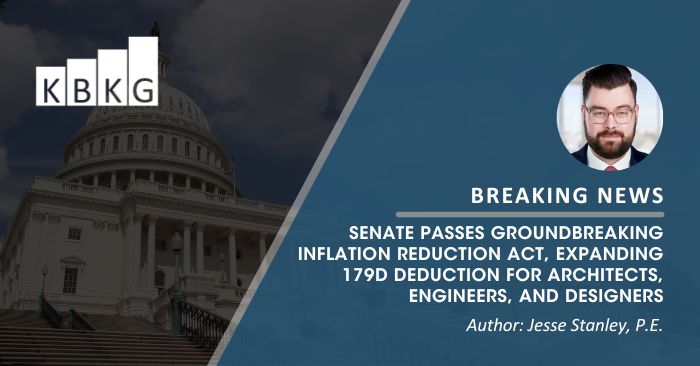 We recently posted a brief update on the Inflation Reduction Act. After negotiations between Senate Majority Leader Chuck Schumer and Senators Manchin and Sinema, an updated Inflation Reduction Act has passed the Senate and moves one step closer to being enacted through the House of Representatives and President Biden. With the Senate being the toughest hurdle in moving forward with a reconciliation bill, it is expected that this bill will become law soon.

Should this bill pass, what does it mean for architects, engineers, and designers?

The proposed changes include a significant increase in tax deductions of up to $5 per qualified square foot, up from the current rate of $1.88 in 2022. Currently, architects, engineers, and designers are eligible to be allocated these tax deductions when designing energy-efficient government-owned buildings & improvements. This upcoming increase in tax deductions is a cornerstone of the $369 billion being spent on energy security and climate change investments in the bill, which President Biden called, “the largest investment in clean energy and American energy security in history.”1

In addition to nearly tripling the maximum tax benefit, the bill further expands the potential for architects, engineers, and other designers by making them eligible for 179D tax deductions when designing energy-efficient building systems and improvements for tax-exempt entities. These can include:

Find out more about who can qualify for 179D tax deductions and the process for claiming the deduction.
Questions about this proposed bill and what that means for your client or company? We’re here to help. Let’s schedule a time to discuss how to claim the deduction retroactively and plan for the 2022 and 2023 tax years.

Would you like to speak with one of our 179D experts? Schedule a call.