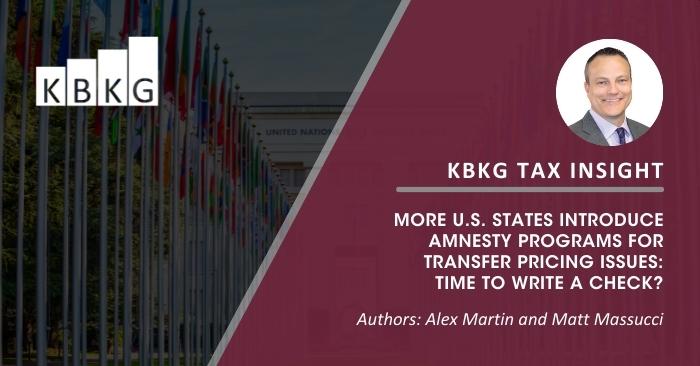 Some taxpayers equate voluntary state tax amnesty programs with an episode of “The Sopranos” operating in New Jersey– volunteer to pay us now, or you pay much more when we visit later during an audit. State transfer pricing amnesty programs have become more popular recently as states including New Jersey, North Carolina, Indiana, and Louisiana have offered opportunities to collaborate with the State Department of Revenue to resolve outstanding intercompany pricing audit risks.

Some U.S. states have become increasingly aggressive in auditing transfer pricing, and adjustments can lead to significant state tax due. Meanwhile, we expect more states to follow the success of North Carolina’s amnesty program. Should companies apply for state transfer pricing amnesty?

KBKG Insight:
A key question for companies: Is the investment in a transfer pricing amnesty program worth the reduction in tax audit risks? Companies may be surprised by how an outsourced transfer pricing economist would assess their state-to-state intercompany pricing.

Yes, but not all states. So-called “separate entity” or “separate reporting” states can challenge companies over the intercompany prices charged between states. Why? For separate entity states, the cross-state prices charged for goods, services, royalties, loans, and other transactions affect how much tax is paid on a state-by-state basis. Fortunately, state intercompany transfer pricing rules generally follow US transfer pricing regulations.¹

In addition, some states that have moved to combined reporting do audit for transfer pricing between combined groups and foreign-owned companies.

¹Note that some states also have the option of forcing combined reporting or adjusting apportionment factors in certain situations in addition to transfer pricing regulations.

While U.S. states are interested in transfer pricing, most departments of revenue have concluded that outside economic expertise is necessary for audits, support, and training. More specifically, some U.S. states have large contracts to engage economists for conduct audits. In fact, the Multistate Tax Commission initiated a program to pool resources to hire transfer pricing experts.²

Companies litigating a transfer pricing issue are generally not accepted into these types of programs.

Is the Amnesty Worth It?

Companies selected for a state transfer pricing audit should clearly consider an amnesty program to mitigate the risk of penalties and large adjustments. However, without a well-argued position, companies may be surprised as to how a transfer pricing economist assesses the value chain of operations within the state.
For the “unidentified taxpayers”, we advise caution when considering applying for amnesty on transfer pricing issues. While the benefits of waiving potential penalties, resolving complicated transfer pricing issues, and closing open tax years, the outside economist may recommend a much higher tax bill than a company may expect. North Carolina’s $100 million tax windfall demonstrates the benefits of a state amnesty program, but adjustments to a company’s state transfer prices can raise effective tax rates significantly.

Companies entering a transfer pricing amnesty program may be in for a surprise after facing scrutiny from an outside economist alongside state tax auditors. In fact, unprepared taxpayers may feel like they met Tony Soprano given the dollars at risk in a “voluntary” agreement. Before entering discussions with state tax authorities, we recommend assessing “worst-case” scenarios for the amnesty program along with the risk of penalties in the event of an audit. Regardless, developing a persuasive argument for the company’s state transfer pricing policy may be the best decision of all.

²The initial MTC training included Alabama, Connecticut, Florida, Georgia, Iowa, Kentucky, Louisiana, New Jersey, North Carolina, and Pennsylvania.
³The consulting firm would only apply the “Comparable Profits Method”, a profit-based method, to calculate a transfer pricing adjustment in all cases. The firm was successfully challenged for not reviewing and selecting a “Best Method” when conducting an audit, as required under Treas. Reg. §1.482.

Do you have questions about the amnesty programs for transfer pricing? Contact us today to see if you qualify.

KBKG was named one of the world’s leading transfer pricing consultancies by the International Tax Review for 2021-22 and 2022-23.

Alex Martin – Principal
Midwest
Alex Martin is the Principal and Transfer Pricing Practice leader at KBKG, operating from Michigan. He has 25 years of full-time transfer pricing experience working in Washington, D.C.; Melbourne, Australia; and Detroit, Michigan over the course of his career. KBKG was named one of the world’s leading transfer pricing consultancies by the International Tax Review for 2021-2022. » Full Bio