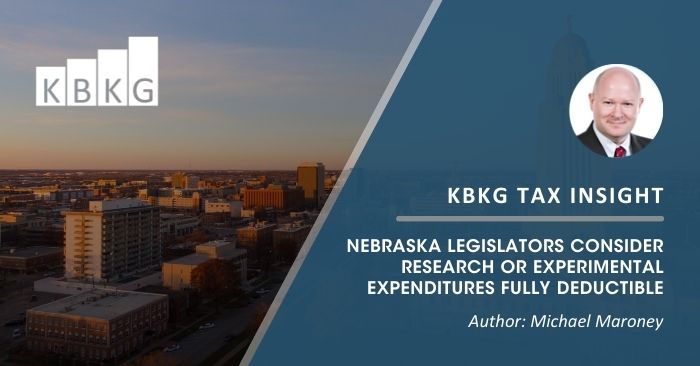 Earlier this month, Nebraska State Senator Brett Lindstrom introduced Legislative Bill 827 allowing taxpayers to fully deduct research or experimental (R&E) expenditures in the year in which they were paid or incurred. Beginning January 1, 2022, federal law under IRC Section 174 requires federal taxpayers to charge these expenses to a capital account and amortize them over 5 years if these are domestic R&E expenditures or over 15 years if these expenditures are for research activities occurring outside the United States.
There has been much criticism of the change in federal tax treatment of these expenditures, since eliminating the ability to immediately fully deduct the expense in the year in which it was paid or incurred delays the tax benefit received from the expenditure. Nebraska’s intent appears to be to decouple from the federal law with this new bill. Nebraska taxpayers have the opportunity to take advantage of the federal and state R&D tax credits for activities meeting the requirements of IRC §41 (To be eligible for R&D Tax Credits, research activities must meet the criteria in the IRS Four-Part Test). The tax credits are available for expenditures including:

KBKG Insight: Qualifying research activities may be present in a multitude of different industries including, but not limited to manufacturing, software development, architectural and engineering design, and agriculture.

Should this bill pass, Nebraska taxpayers have an opportunity to continue fully deducting their R&E expenditures occurring in the state immediately, as well as claim the state research and development tax credit. Also, remember that the federal R&D credit was made permanent as part of the PATH Act of 2015, and it may be claimed in addition to the state credit.

To learn more about the R&D Tax Credit, contact our experts.

Michael Maroney – Director
Midwest
Michael Maroney is a Director with KBKG at our Chicago, IL office. He advises clients on tax matters related to federal and state R&D tax credits. He has advised numerous Fortune 1000 clients across a variety of industries. He has successfully defended his client’s R&D claims before the IRS and state taxing authorities. He has been an instructor on these topics for numerous CPA and industry associations and has authored articles related to federal and state R&D tax credits. » Full BioLegislators Consider Research or Experimental Expenditures Fully Deductible