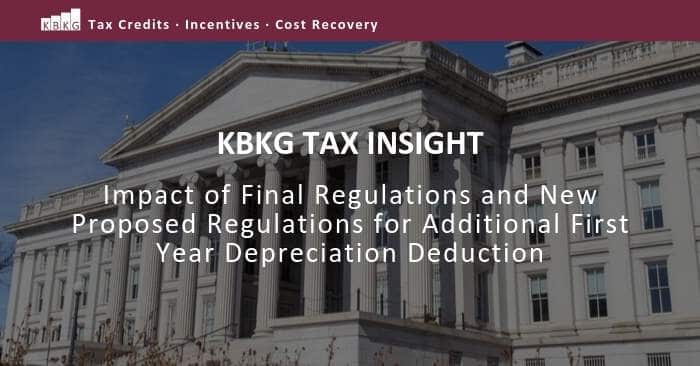 For the most up-to-date information on Qualified Improvement Property, see our latest post.

On September 13, 2019, the IRS and Treasury Department released the much-anticipated final regulations that provide guidance regarding additional first year bonus depreciation deductions under section 168(k) of the Internal Revenue Code (REG-104397-18). While the final regulations clarified some questions, there are still a few issues left to be resolved. The IRS and Treasury Department released an additional set of proposed regulations (REG-106808-19) to provide some more guidance on issues that were not previously addressed and has provided an October 23, 2019, deadline to submit commentary.

Many taxpayers will be disappointed to see that the long-awaited technical corrections to Qualified Improvement Property (QIP) were not included in the final regulations. Although multiple commenters requested clarification that “QIP” placed into service after 2017 be considered “qualified property,” the Treasury Department and IRS declined to adopt commentary. Consequently, a legislative change must be enacted to provide a recovery period of 20 years or less for qualified improvement property placed into service after 2017 to be eligible for bonus deprecation.

The IRS and Treasury Department provided some relief for taxpayers who were struggling with the acquisition rules related to property constructed for a taxpayer by a third party. Under the proposed regulations, property that was manufactured, constructed, or produced for the taxpayer by another person under a written binding contract was considered “acquired” pursuant to a written binding contract. The final regulations provide that this type of property is now to be treated as self-constructed property. Taxpayers will no longer be weighed down by the “administrative burden” of determining the appropriate date in which the written binding contract was entered. Instead, the acquisition rule will be met under the self-constructed property rules for determining when construction of a substantial nature has been completed.

In addition, the final regulations provided some clarity on the acquisition date of used property acquired pursuant to a written binding contract. The date is determined to be the later of:

The proposed regulations provide that a taxpayer can make a special election to claim the 100% bonus rate on certain components acquired or self-constructed after September 27, 2017 that are part of larger new construction projects where construction began before September 28, 2017. The election was included after multiple commenters requested an election similar to the one provided in section 3.02(2)(b) of Rev. Proc. 2011-26. The proposed regulations provide the time and manner of making the election and provide examples to illustrate the proposed rules. The larger property must be eligible for bonus depreciation at the 50% rate. This is a significant change because in most cases taxpayers were advised to take bonus depreciation under the PATH Act rules at a rate of 40% in 2018 and 30% in 2019 for eligible property where construction began prior to September 28, 2017 but was completed and placed in service in 2018 and 2019.

The proposed regulations clarified that taxpayers leasing property to a trade or business with floor plan financing indebtedness or a rate-regulated utility may claim bonus depreciation provided the lessor is not described in section 168(k)(9)(A) or (B) and provided that all other requirements are met. However, section 1.168(k)-2(b)(2)(ii)(F) of the final regulations hold that taxpayers that operate these businesses as defined in section 163(j)(7)(A)(iv) are still excluded from additional first year bonus depreciation. This could be potentially good news for lessors of dealerships.

The final regulations provide a definition for the term “predecessor” as it relates to a taxpayer or their predecessor having a prior depreciable interest in acquired property. They define predecessor as:

The IRS and Treasury Department now provide a lookback period of 5 years for determining whether a taxpayer or predecessor held a depreciable interest in property. This is a departure from proposed regulations. The IRS remarks that “this bright-line test will be easy for both taxpayers and the IRS to administer.”

The final regulations adopt proposed regulations published in the Federal Register (REG-104397-18) with certain modifications. These regulations now provide taxpayers with only some clarity, but they delay clarification on key issues impacting taxpayers in the current tax year and beyond. The Proposed Regulations (REG-106808-19) will continue to tackle issues the IRS is not ready to finalize.

To find out more about how the Final Additional First-Year Depreciation Deduction rules impact you, please contact us.