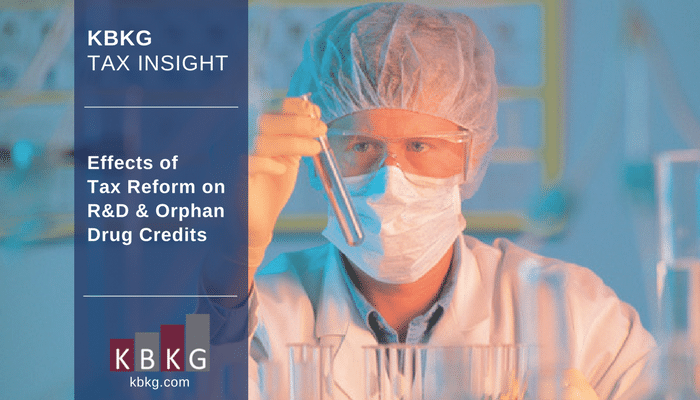 Senate Republicans released their own version of a tax plan on Thursday (November 9, 2017), just a week after the House proposal was unveiled. Although both plans keep the research and development tax credit in place, changes in the tax code will require some additional planning for taxpayers currently claiming or those planning on claiming the R&D tax credit and the Orphan Drug Tax Credit.

Among other things, the future of the Orphan Drug Tax Credit remains uncertain.

However, one thing is certain – both House and Senate Republicans agree that the Orphan Drug tax credit must be reformed. What is not clear is how far the changes will go.

The Orphan Drug tax credit has been available to orphan drug developers since it was enacted as part of the 1983 Orphan Drug Act. Under the Act, Congress sought to incentivize the development of new treatments for diseases and conditions affecting fewer than 200,000 people by offering drug makers tax credits, fee waivers and a seven-year period of marketing exclusivity for an approved orphan indication.

The Senate Republican proposal does not go so far as to repeal the credit, but its sweeping changes may still be significant. The proposal limits the credit to 50 percent of the qualified clinical testing expenditures for the taxable year that exceed 50 percent of the average qualified clinical testing expenses for the three previous taxable years. The percentage is reduced to 25 percent if there are not qualified expenses in any one of the three prior years.

To illustrate, refer to the following example:

Company A is developing a drug to treat a disease affecting less than 200,000 people in the U.S. Its qualified clinical testing expenditures for the past several years is as follows:

The mechanics of the proposed calculation mirror the Alternative Simplified Credit methodology utilized to calculate the R&D tax credit. Additionally, certain aggregation and other special rules similar to those applicable to the R&D tax credit apply where there are controlled groups of corporations, estates and trusts claiming the credit, mergers and acquisitions and short taxable years. Finally, taxpayers may elect a reduced credit in lieu of reducing otherwise allowable deductions in a manner similar to the R&D tax credit under section 280C.

The proposal is silent as to whether the requirement to add back the qualified clinical expenses to the R&D tax credit base calculation would remain viable. The purpose of this requirement is to prevent a taxpayer from claiming both the Orphan Drug tax credit and the R&D tax credit for the same expenditure. Presumably, this provision would survive under the Senate Republican proposal.

Under either proposal, companies researching treatments for rare diseases stand to lose all or a portion of a significant tax incentive that helps lower the cost of their development programs. However, orphan drug developers should be aware that qualifying clinical testing expenses that would have otherwise qualified for the Orphan Drug tax credit may be qualified for purposes of the R&D tax credit. Both versions of the proposed tax bill leave the R&D tax credit in-tact. Although the Orphan Drug tax credit is generally a more lucrative incentive, the availability of the R&D tax credit should mitigate the impact of both proposals.

Both the Senate and House Republican proposals would repeal the deduction for certain unused general business credits (“GBC”).

The GBC is comprised of various tax credits available to businesses that are meant to promote certain business activities, including the Orphan Drug and R&D tax credits.

The GBC’s are subject to limitations based on a business’ tax liability. Unused credits may be carried back one year and carried forward 20 years.
As is stands, a deduction is allowed to the extent certain portions of expiring GBC’s remain unused. Generally, 100 percent of the unused credits are allowed as a deduction in the taxable year after the credit expired. For purposes of the R&D tax credit, the deduction is reduced to 50 percent.

Taxpayers that are currently carrying forward (or expect to be) Orphan Drug and/or R&D tax credits, would be well advised to evaluate their ability to utilize the tax credits before the end of the tax credit carry forward period.

Both House and Senate Republicans agree when it comes to repealing the Alternative Minimum Tax, or AMT.

Under current law, only eligible small businesses (those that average less than $50 million in revenue for the previous three tax years) can use the R&D tax credit to offset AMT liabilities. Repeal of the AMT would remove the limitation to utilize these credits for all companies and individuals by allowing an offset to a company’s regular tax liability.

Under both plans, the proposed legislation discussed above would be effective for tax years beginning after December 31, 2017. Passing the tax reform bill still faces many challenges ahead. While there is disagreement among both Houses of Congress, there is agreement that tax reform is necessary.

During the “House Speakers Weekly Briefing” (held on November 9, 2017), House Speaker, Paul Ryan affirmed that Congress will go to conference.